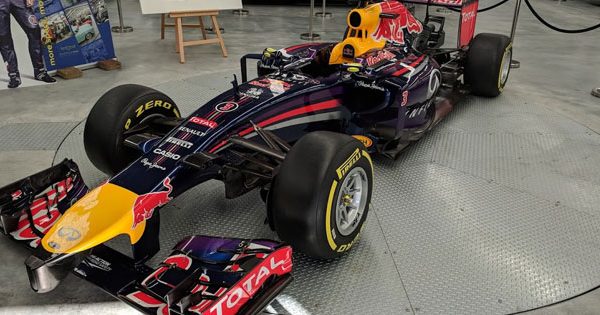 Daniel Ricciardo’s very generous offer to favour the Motor Museum with a long term loan of Red Bull RB 10, the car that provided him with such a great entry into the top league of formula one racing, has proved to be a great drawcard for visitors to the Motor Museum; and our volunteers take great delight in showcasing this fantastic exhibit.

The history associated with the evolution of the car and its racing success is a remarkable story:

Red Bull RB10 was designed by Adrian Newey for Infiniti Red Bull Racing to compete in the 2014 Formula 1 season. It was driven by reigning World Drivers’ Champion Sebastian Vettel and Daniel Ricciardo, who was promoted from sister team Scuderia Toro Rosso after Mark Webber announced his retirement from the sport at the end of the 2013 season. The RB10 was designed to use Renault Sport’s new 1.6-litre V6 turbocharged engine, the Renault Energy F1-2014.

The car was launched on 28 January 2014 at the Circuito de Jerez. Keeping with the tradition of naming his race cars, Sebastian Vettel actually named the RB10 “Suzie”.

The early stages of the RB10’s development were seriously limited by several problems during the first test in Jerez de la Frontera. The team was plagued first by problems with the physical Renault Energy F1-2014 unit that prevented the individual components of the power unit from working together. Issues also developed with the software governing the turbo unit. In addition Red Bull suffered from unique problems arising from the tight packaging of the RB10 chassis, which caused temperatures within the car to climb so high that parts started to burn.

During the second outing at the Bahrain International Circuit, RB10’s were forced to run with the Energy Recovery System (ERS) disabled on Renault’s advice, robbing them of up to 150 horsepower (112 kW). Although team member Sebastian Vettel was able to complete over seventy laps of the circuit on the first of four days of testing, the team completed less than forty more over the remaining three days as the chassis was further plagued by mechanical issues.

However fortunes turned around with limited success in Malaysia and Bahrain and a third place in Melbourne. The RB10 took its first win of the 2014 season when Daniel Ricciardo won the seventh race of the season in Canada. His first win. Before the season was finished Daniel also took out wins in the Hungarian and the Belgian Grands Prix.

At the final race of the 2014 season in Abu Dhabi, both Red Bull cars were excluded from qualifying for having a front wing that was over the wing flex limits. As a result the Red Bull cars were sent to the back of the grid. The team was, however, able to claw back a creditable result with Daniel finishing fourth and Sebastian Vettel finishing in eighth place.

Daniel notched up eight podium finishes including three wins in the 2014 season with RB 10. A remarkable effort considering the early problems experienced with the car.

Come and get up close and personal with a real, modern F1 Racing Car.

Make sure to copy Registration number after successful submission.

Thank you for payment.

Your ticket for the: Red Bull F1 Racing Car